Gaming on a budget, worth Samsung note-cing! 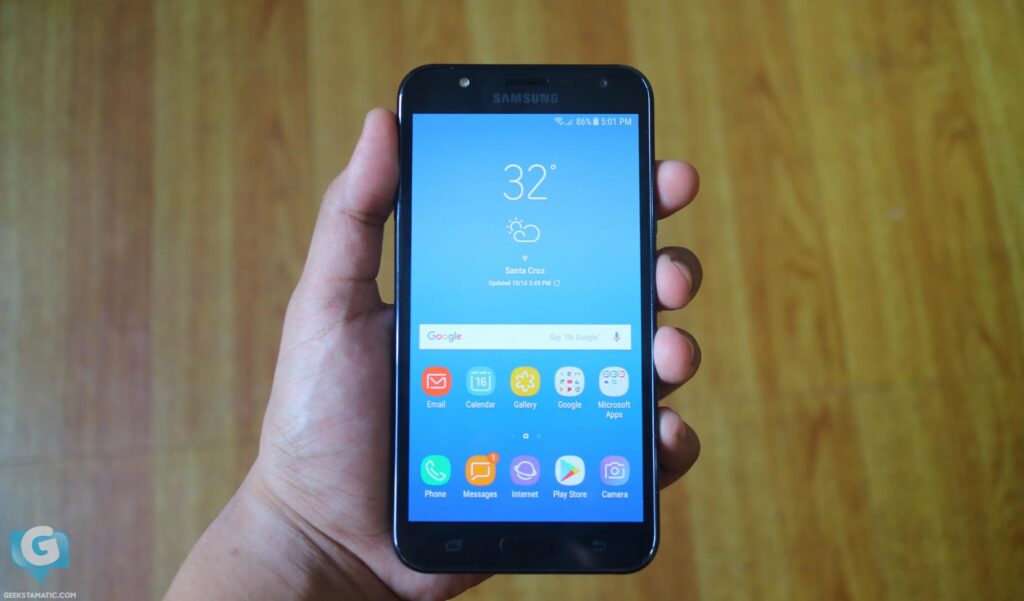 Samsung’s newest device offering in the entry-level section is the Galaxy J7 Core, it claims to deliver a good mobile gaming experience at a sub-Php10k price. Is the device a good gaming smartphone to take you to the next level of your gaming experience? Let’s find out in our review.

The packaging is the same as the other J-series smartphones that include the phone unit itself, a micro USB cable, a charging adapter, its removable battery, quick start guide, and the warranty card. Interestingly, Samsung partnered with Mobile Legends to complete your gamer goals, giving you a promo card that is included inside the box, it offers a special code that you can use to claim for the Mobile Legends booster kit.

The Mobile Legends booster kit gives you 10,000 Battle Points and three 7-day Hero Trial, available from September 1 to October 31, 2017 only.

The J7 Core follows the same looks and style of Samsung J-Series smartphones. At the front are 5.5-inch Super AMOLED HD display and its front camera, along with its LED flash. Together, it is assembled with an embossed home button and two capacitive buttons that do not have a backlight. The display though is excellent even if it only has a High-Definition (HD) panel, perfect for normal to mid-setting gaming displays, and even watching videos.

With the modernization of smartphones today, most of the smartphones in this price range are sporting a fingerprint scanner and sadly this phone doesn’t have it.

The right side houses the power/lock screen button while on the left side, it has the volume rocker keys. Its side frames are made of plastic covered with a metallic finish that gives its premium feel of the device. But be careful and avoid scratches.

The bottom part of the J7 Core contains the Micro USB port, Microphone, and the 3.5mm audio jack.

Turning the phone over and you’ll see atop is the rear camera and its LED Flash, including the loudspeaker module.

Checking out the internals, we can see the two Micro-SIM Card Slots and the MicroSD Card Slot that supports up to 64GB. In addition, the removable 3,000mAh capacity battery will be seen. While it is covered by a textured polycarbonate back housing that is quite resistant to fingerprint grime and smudges.

In total, this phone is a hand-friendly smartphone given with a firm grip, despite the fact that it is a 5.5-inch smartphone it might be a bit hard to reach all inputs with one hand, and not to mention that the latest ones are achieving a thinner hold with fewer bezels. While its weight is not a problem as it’s light and comfortable enough to be carried around for a day.

Beefing up the game, it sports an Exynos 7870 Octa-Core processor together with 2GB of RAM, it makes this smartphone to promise with good performance. While we test how it ranks with other phones, we got a 45081 Antutu Score—for its price, it is comparable to other entry-level to mid-range smartphones with 3GB of RAM. We’ve used this as our daily driver and it performed reasonably well. Most of the time, when multitasking it can handle casual gaming and switch to social media at the same time. Along with infrequent browsing, the J7 Core is able to function and keep up with the pace.

It scores 3828 at PC Mark’s Work 2.0 performance test, while on 3D Mark’s Ice Storm Unlimited test it scores 6660, and lastly, we got a scoring from GeekBench which yielded 724 for single core, and 3661 on the multi-core category.

According to our sensor test conducted, it revealed that it doesn’t have plenty of sensors, even the usual ones that are essential for gaming are not found. Having said that, it’s a bit disappointing to know that orientation and gyroscopic sensors are not installed. For these are the required sensors of some of the latest games today. While the basic hardware requirements: Wi-Fi, GPS, and Bluetooth works well as advertised.

With the basic phone functions, receiving texts and calls works pretty well. Moreover, the microphone records a clean audio although it lacks noise cancellation, we find that it is not that noisy, especially when making a call.

This device is equipped with a Super AMOLED display with a high-definition resolution, given that it has a 3,000mAh battery it turns out in our test that we can say, it has an upright battery life. We got a result of 15hours+ in our conducted PC Mark’s Work 2.0 battery life. Fair enough that Galaxy J7 Core is dependable for a day of your usual activities like gaming, watching videos, internet browsing, and photography. Just be wary of your battery charge left from time to time because it does not have a quick charging. You can expect around two hours to fully charge the J7 Core. Going to the real-life tests, we’ve been using it to play Mobile Legends most of the time, and took quite a lot of photos for Social Media posting, with occasional calls, and text messaging.

The J7 Core has a display of 5.5-inch Super AMOLED with an HD resolution producing good color saturation that is perfect for games, pleasing to the eyes. It’s contrast and sharpness are fairly seen together with good viewing angles. The phone supports up to ten multitouch points that is an advantage for most of the games today. And especially, they are helpful to multiplayer games. Moreover, the brightness is not a problem as it is very visible on outdoors even on a strong sunlight environment. It also can go on a normal dim light screen for night viewing.

We tried streaming online with 4G internet connection, watch via Youtube at 720p and it has no skips nor lags while watching.

The rear camera possesses a 13-megapixel with f/1.9 aperture and capable of quick autofocus. With that, we think that the camera of J7 Core is worth noticing with its aperture that has a direct impact on the depth of field, and not to mention, achieving more bokehlicious shots. Colors can be well captured but sometimes it causes to a dull, over-saturated, and well-saturated. In addition, contrast and exposure are fairly decent. See sample shots below(resized to 100kb below for web optimization)

And a sample picture posted on Social media without any filter:

Going at the front, selfie might not be the game you’re looking for but it has nifty features just like the other smartphone brands are offering with their device lineups, a few gimmicks on the selfie actions.

Its 5-megapixel front camera packs a few features such as filter on skin tone, slim face, and large eyes. And to add, it has also a Wide selfie feature for group photos, so a wide-angle lens can be taken for granted. Meanwhile, its LED flash is moderately bright and does a good job at lighting up a dark environment.

Going back to the rear camera, it has features from the Samsung’s latest TouchWiz UI skin that has the default Auto mode, and other modes as well. Such as Pro(Manual setup of ISO, WB and Exposure Compensation), Panorama, Continous shot, HDR, Night, Sports and Sound & shot. All these modes are alternatively worth checking out and fun to try aside from your games.

From the phone’s retail price amounting Php 9,990, there are now a lot of phones that are in this range. But knowing that there are consumers who patronize by the brand, Samsung is trusted for Smartphones. And the Galaxy J7 Core gives a battle in the arena of smartphones with decent specs mentioning, Super AMOLED display, removable 3,000 mAh battery, and a triple-card slot that are somehow a dealbreaker. Admittedly, the budget section has a lot of competition that most brands are getting tougher by the day, and as the market demands. But then, you always have plenty to choose from.

What we find not:
– Low internal storage
– Lack of sensors for gaming