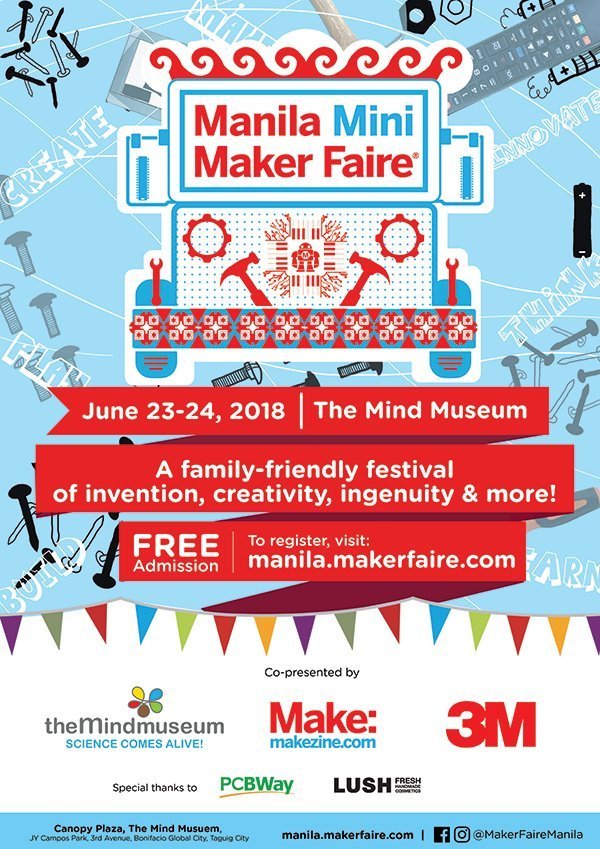 MANILA, Philippines – June 2018 – For the second year in a row, the Philippines will be in the global maker map again as The Mind Museum, Make Magazine, and co-presenter 3M Philippines, organize this year’s Manila Mini Maker Faire (MMMF) on June 23-24, 2018 at The Mind Museum. The entrance to this event is free to the public. 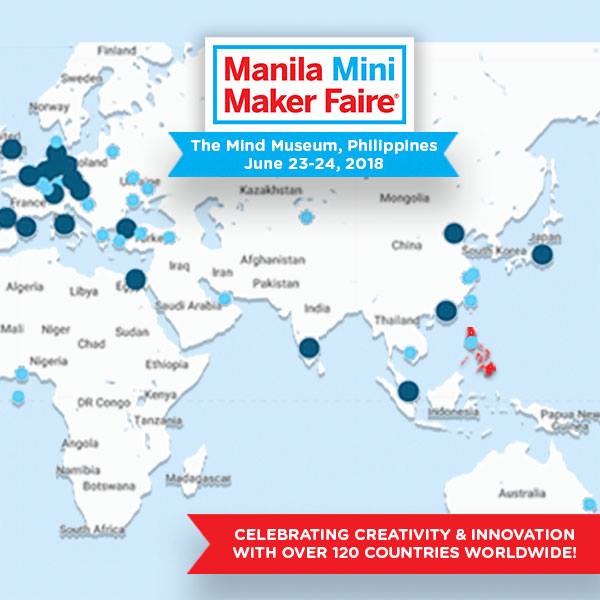 A Maker Faire is “a gathering of fascinating, curious people who enjoy learning and who love sharing what they can do. It’s a venue for makers to show examples of their work and interact with others about it. Many makers say they have no other place to share what they do. DIY (Do-It-Yourself) is often invisible in our communities, taking place in shops, garages and on kitchen tables. It’s typically out of the spotlight of traditional art or science or craft events. Maker Faire makes visible these projects and ideas that we don’t encounter every day.”

The Manila Mini Maker Faire 2018 will have over 70 Makers from all over the Philippines, including Visayas and Mindanao. Projects like paper crafts, upcycled furniture, electronic beatboxes, and a lightweight car body made from abaca will be showcased together with the usual favorites like robots, 3D printing, STEAM education, and so much more! Attendees can also sign up for a variety of free and ticketed workshops. Workshops such as paper engineering, clay and pottery-making, 3D design, and more will be available for everyone interested to learn new things.

This year’s MMMF also aims to establish a stronger maker community through networking and collaboration with makers from different parts of the country. A special innovation tour, hosted by 3M Philippines, will be held before the fair to help inspire makers to continue making. This will be followed by a Maker’s Networking Night to give an extraordinary chance for participants to interact with their fellow makers.

What is game-changing about the Manila Mini Maker Faire and the Maker movement, in general, is that they actively explore the cross-overs among the fields of science, engineering, art, performance, and craft. It is no longer about isolated crafts or guilds but about how one field can inform the other and produce innovative things! The technologies that are birthed in experimentation and collaboration not just with the specialists in your field but with others working on other kinds of materials, processes, and knowledge.

“The Mind Museum continues to push for the Filipino public to be part not just of the conversations in science and engineering around the world but also in making and doing. This second MMMF in a row that The Mind Museum is hosting is a salute to the makers in our local community who not only affirms but persist, despite the odds, to breed and raise the bar of creativity in the way technology can be at the service of human lives,” says Maribel Garcia, curator of The Mind Museum.

“3M Philippines has been behind The Mind Museum since its beginning as a founding donor. We are pleased to support the Manila Mini Maker Faire on its second run this 2018. Innovation is at the heart of 3M. We never stop being curious because there is a value in asking what if. In wondering. Wonder leads to improving the world around us,” shares Ariel Lacsamana, President & Managing Director of 3M Philippines.

The original Maker Faire event was held in San Mateo, CA in 2006 and in 2017 celebrated its twelfth annual show with some 1,250 makers and 150,000 people in attendance. World Maker Faire New York, the other flagship event, has grown in five years to 900+ makers and 90,000 attendees. Twenty-three other larger scale Maker Faires occur in cities around the world—Detroit, Atlanta, Berlin, Paris, Rome, Tokyo, and Shenzhen to name a few— and over 120 community-driven, independently organized Mini Maker Faires are now being produced around the world.

The Manila Mini Maker Faire is made possible by 3M Philippines and also supported by Norde International Distributors, PCBWay, and Lush.

Visit The Mind Museum on June 23-24, 2018, and personal experience just what local passion and ingenuity can conjure up. Drop by, and be inspired by the various Filipino makers that manage to make their mark through DIY!